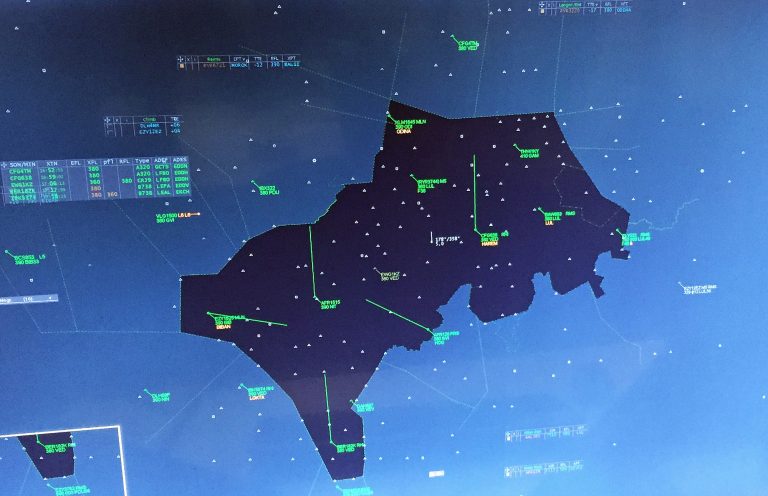 15 March 2021:
Starting on 25th March a set of permanent new procedures will improve the interface between Germany and Switzerland. Airspace users can remain at fuel-efficient cruising heights for longer, reach higher altitudes earlier across international boundaries and have more shortened routes available. Overall, this will reduce the environmental impact of flights in Functional Airspace Block Europe Central (FABEC) airspace and is another example of the environmental engagement of FABEC air navigation service providers.
Flight arrivals crossing the border are accepted 2,000-4,000 ft higher than previously. For example, flights approaching Basel-Mulhouse from the east are being transferred from Rhein UAC at a higher altitude than before and directly to the Swiss controllers instead of descending into the lower altitudes of the Munich area control center first. The new interface also means, that Frankfurt departures entering Swiss airspace are no longer held at FL320 but can enter at any altitude.

Dirk Mahns, COO DFS said: “This is an excellent example of how the FABEC cooperation platform acts as a catalyst for improvement. In fact, these regional initiatives are the essence of any network improvements as they are based on daily operational experience and mutual trust. This success – like others in the past – encourages us to improve the ATM network further.”

Urs Lauener, COO Skyguide stated: “These steps are part of a series of initiatives over several years to reduce costs for airspace users and emissions due to fuel burn. We are happy that these initiatives result in real benefit and that our engagement with the environment has been recognized in winning the ATM 2020 Environment Award. New initiatives – such as cross-border free route – are already on the horizon.”

Further amendments take effect from 25 March 2021 which enable aircraft travelling south over the Alps to airports such as Geneva and Milan to remain at cruising altitude for 3 minutes longer and enter Swiss airspace 4,000 ft higher than before, benefiting between 40 and 65 flights daily at pre-pandemic traffic levels. Even more flights travelling in the opposite direction to airports in Germany stand to benefit in the same way, an improvement for between 80 to 110 daily flights. Environmental impact will also be lower for 20 to 30 daily arrivals into Basel-Mulhouse that remain at cruising altitude for an additional 4 minutes and enter Swiss airspace 4,000 ft higher than before; and 40 to 60 daily Frankfurt departures reach higher altitudes due to optimised entry conditions into Swiss airspace.

The changes are permanent for each partner and both have agreed they will be maintained as long as airspace capacity permits. Figures are based on 2019 traffic volumes.

The airspace of the six FABEC States of Belgium, France, Germany, Luxembourg, the Netherlands and Switzerland is one of the busiest and most complex in the world. The majority of major European airports, major civil airways and military training areas are located in this area. FABEC airspace covers 1.7 million km² and handled in 2019 over 55% of European air traffic. In 2020, FABEC won the ATM Environment Award for the second consecutive year.